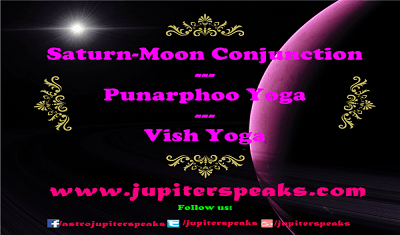 As per Vedic Astrology, effects of Moon Saturn Conjunction or Punarphoo Dosha or Vish Yoga in horoscope of males and females are unique for all ascendants.

While talking about the frequent and most occurring conjunctions in the horoscopes of the people, conjunction of slow moving heavy planet Saturn (Shani) and very fast moving small planet Moon (Chandra) is one of them. Since we all know that Moon almost takes 2.5 days to cross a zodiac while Saturn stays for almost 2.5 yrs in a sign or rashi thus Saturn conjunct Moon twice in month, hence this planetary combination easily found in many charts.

This Saturn Moon Conjunction in Vedic Astrology can be understood very easily and has not so complexes as other planetary conjunctions.

Thus, when Moon Saturn planets conjunct in different house in horoscope then we can see the influences easily over the significations represented by the planets, as a general rule it is very easy to taint or spoil white or clear & pure substances rather than other colors thus here Moon gets most afflicted by Saturn which is quite larger in size and intensity than Moon.

As this Saturn Moon Conjunction is also termed as Punarphoo Yoga in vedic astrology which is believed to spoil marital bliss. Nowadays, Vish yoga name is also prevalent among Astro enthusiasts and this conjunction is called so as it fills one’s mind with poisonous thoughts and negativity.

Read More : Effects of Sun Conjunction with Rahu in Astrology

Before entering into direct prediction about  Moon Saturn Conjunction, it is very essential to gauge other factors as well such as degree of closeness, house, dignity, aspects , navamsha, astakvarga, Dasha etc. which will decide the intensity and extent of effect, of course, intensity may vary yet intention of the conjunction will definitely be felt every now and then.

Saturn Remedies   AND   Remedies For Moon